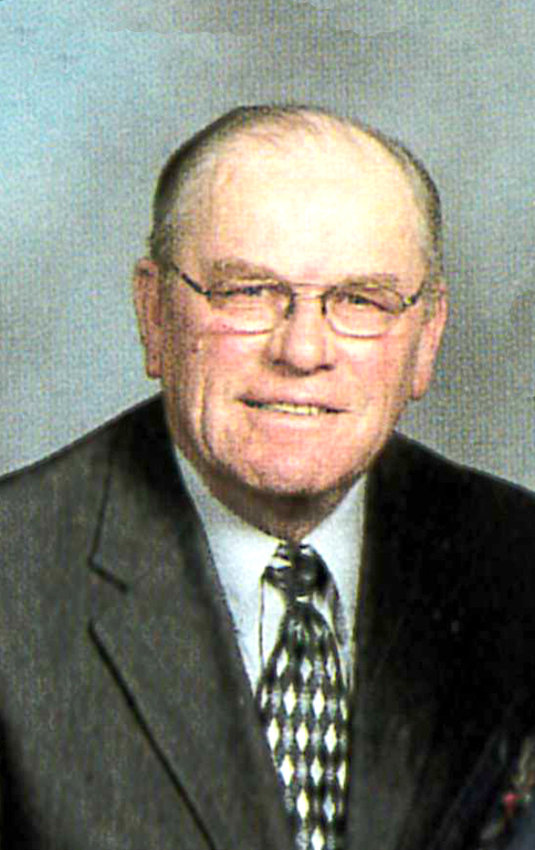 Vernon was born on a farm west of Ute on March 13, 1939 to Fritz and Ellen (Borcherdt) Thies. When he was 5, the family moved to a farm six miles north of Ute. He was baptized and confirmed at St. Paul Lutheran Church, where in his earlier years enjoyed teaching Sunday School, served as secretary and as an usher. Vernon attended country school as well as Lutheran school in Ute, and then graduated in 1957 at Mapleton High School, where he enjoyed playing football. He was a member of the National Guard.

While farming with his father for a few years, Vernon met the love of his life, Evelyn Reed and they married on January 22, 1961. They moved to a farm five miles east of Mapleton, where he enjoyed farming for 49 years.

Vernon and Evelyn were blessed with three children, Terry, Sheryl, and Douglas.

In January 2010, a stroke disabled him from the life he loved. Vernon always said “I’ve never worked a day in my life, because I love what I do.”

In September 2010 Vernon and Evelyn moved in to their current home in Mapleton.

Vernon enjoyed operating his D6 Caterpillar, raising cattle and hogs, and going to farm auctions looking for a bargain. He was a true “2nd Hand Rose” … he didn’t need new. There weren’t too many things he couldn’t fix or repair, if not manufacture himself. Camping with the family, vacationing in Colorado, horseback riding, snowmobiling with friends and spending time with his family he thoroughly enjoyed. He was a gentleman, loved animals, his dogs and was a wonderful father, grand-father and husband.

He leaves to mourn his wife of almost 62 years, Evelyn; two sons, Terry and his wife Dana, and Doug and his wife, Melanie; and one daughter, Sheryl, and her husband Steven Dierenfield; nine grandchildren and five great-grandchildren; one brother, Warren; one sister, Judy (Gary) Pohlman; and many nieces, nephews, cousins, friends and neighbors. He was proceeded in death by his parents.

A funeral service was at 10 a.m. Friday, Nov. 18, at St. Paul Lutheran Church in Ute with Reverend Nathan Peitsch, officiating. A recording of the service was posted on the Goslar Funeral Home website with Vernon’s obituary. Music selections were “My Hope Is Built On Nothing Less,” “Chief Of Sinners Though I Be,” “The Lord’s Prayer,” and “Precious Lord Take My Hand” with Darren C. E. Goslar as soloist and Lynette Thies as organist. Burial followed in the Mount Hope Cemetery, Mapleton. A visitation was Thursday, Nov. 17, at St. Paul Lutheran Church, Ute. Arrangements were under the direction of Goslar Funeral Home and Monuments, Onawa.

Condolences may be left online for the family at www.goslarfuneralhome.com